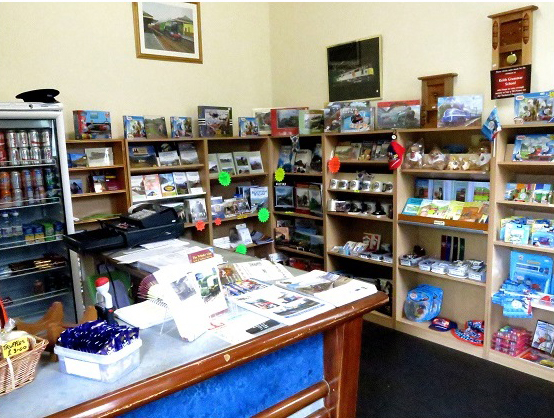 Our shop (left photo above) is located in Keith Town Station (AB55 5BR) where a variety of goods, ranging from keyrings, pens, mugs, fridge magnets, locally produced sweets etc to railway books, DVDs, and preowned model railway items are on sale. The shop also includes a children’s section, which in addition to the Peter’s Railway series of books and booklets also includes Thomas the Tank Engine range and Jack the Station Cat books. A limited range of souvenirs and books are also available from the shop counter in Dufftown Station (right photo above).

In addition the following postcards and books can be purchased by post.

Complete sets of 8 full colour postcards depicting various scenes from the Keith and Dufftown Railway are available by post for £2.00– P&P £1.00

Set of 4 full colour postcards depicting various scenes from the Keith and Dufftown Railway are available by post for £1.00– P&P 50p

Individual cards can be bought at Keith or Dufftown Station for 30 pence each.

The train journey from Inverness to Kyle of Lochalsh is one of the most scenic rail experiences in Britain. Built in three stages between 1860 and 1897, it attracts thousands of tourists every year and The Insider Rail Guide – the first of a new Highland series – takes a long-established tradition in a new direction.

The guide provides an entertaining, informative and occasionally quirky companion to the 82- mile journey linking Scotland’s North Sea coast to the Atlantic Ocean. The book is written by two authors steeped in Highland railways who provide a history of the line and insightful commentaries on the view from the window. There are practical chapters on preparing for and making the most of the journey.

In a further contrast with standard visitor literature, Inverness to Kyle of Lochalsh is illustrated entirely in black & white, with over 50 eye-catching photos, bespoke hand-drawn maps and fine sketches of scenes along the railway. It is a book for both the seasonal visitor and for those with a keen interest in railways. The second Insider Guidebook on the Aberdeen to Elgin & Inverness line has been published by Kessock Books. It is written by our former Membership Secretary David Fasken and railway consultant and author David Spaven. This book covers one of Scotland’s unsung rail journeys and it highlights the Keith & Dufftown Railway along the way. KDRA member Ron Smith’s local history of the Keith “Hush Hush” also features. The “landscape” format continues and the book provides a history of the line and commentary on the “view from the window”. It is illustrated with over 60 black and white photographs, hand-drawn maps and Inverness artist Merrill MacWilliam’s wonderful sketches. This is a book which will appeal to regular passengers and visitors alike. Other books available – please contact the railway for details

Payment by cheque or Postal Order only, made payable to:-

If ordering more than one book please include full post and package for all books, and any excess will be refunded.

The railway museum is housed in the former waiting room of the station building at Dufftown. Amongst various railway artefacts, it features photographs and a diorama explaining the connection between the Canadian Pacific Railway and Dufftown born George Stephen, later Lord Mount Stephen.