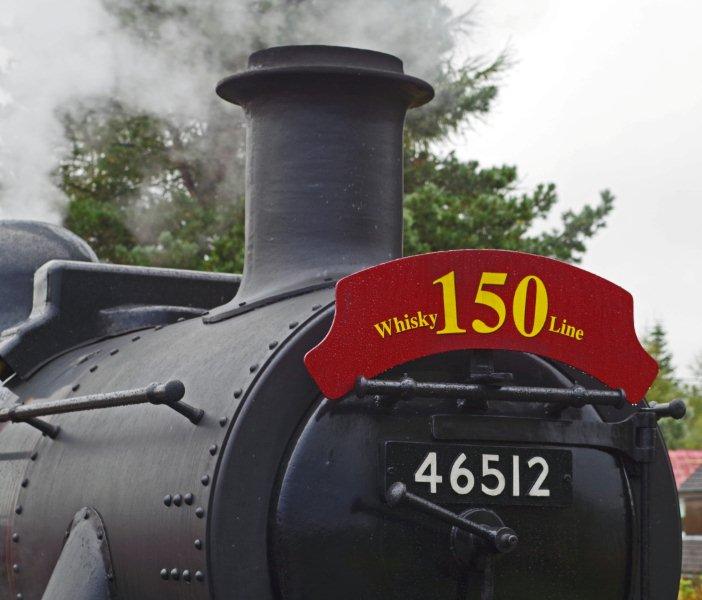 The Keith & Dufftown Railway ran a very successful 150th Anniversary Steam Weekend in October 2012. The KDR hope to repeat this steam weekend in the future but currently (October 2013) has NO concrete plans to do so.

This photo is copyright of the Strathspey Railway and is reproduced here by their kind permission.

To celebrate the 150th anniversary of the opening of the railway line between Keith and Dufftown in 1862, the Keith & Dufftown Railway Association held a four day “Steam Weekend” from Friday 12th to Monday 15th October 2012 inclusive.

Three daily trains operated over the 11 mile line in each direction, headed by Strathspey Railway’s Ivatt 2-6-0 46512 on loan for the weekend. This was a unique opportunity to experience the first scheduled steam service to work the line since 1961, with the locomotive tackling long and demanding climbs of up to 1:60 through the beautiful Morayshire countryside from Dufftown over the Fiddich Viaduct and via Loch Park, Drummuir, Towiemore and Auchindachy to Keith Town Station, and return. The steam locomotive hauled the Association’s two B. R. Derby Class 108 two-car diesel multiple unit sets plus a B. R. Derby Class 108 single car Driver Trailer, making up five coaches, in both directions.

The Keith & Dufftown Railway Association is run entirely by volunteers and operates the most northerly heritage railway in the United Kingdom.

A special timetable was in operation (see below).

This unique event was supported by Moray LEADER and Awards for All Scotland.

Aims of the event

• To celebrate 11 years of running as a volunteer concern

• To boost membership of our Association

• To act as a learning experience for future steam engine operation

Trains operated to the above timetable on 12th to 15th October 2012.

The Official Programme of the 150th Anniversary Celebrations 2012 is still available to buy at Keith Town station at a price of £1.00 or by mail order (see Shop page for details).

“As souvenir gala brochures go, it’s up there with the best of them – easily rivalling those sold at galas by much bigger railways – but it’s also a welcome work of reference on a comparatively overlooked railway”.

A unique Bachmann Ivatt Class 2, OO Gauge model locomotive, professionally re-numbered as 46512 to commemorate the 150th Anniversary of the Keith & Dufftown railway was available to order. The locomotive, pictured, was displayed at the shop in Keith Town Station.

PHOTOS OF THE EVENT

The story of the 150th Anniversary Steam Event 2012 will be told here mostly in pictures with an occasional comment. The photos will be displayed in the following order:

Arrival of the locomotive at Dufftown, Steam up, Trial runs. The journey from Dufftown to Keith. Departure from Dufftown, Fiddich Viaduct, Parkmore bank, Loch Park, Drummuir, Towiemore, Auchindachy, Douglas Brae, Strathmill and Keith. The photos will then trace the return journey from Keith to Dufftown.

The following photos show the tender being unloaded in the yard at Dufftown, October 2012.

The engine arrives at Dufftown, October 2012.

The low-loader with the engine being manoeuvred in Dufftown yard.

The following photos show the engine being unloaded in the yard at Dufftown.

STEAM UP AND TRIAL RUNS

Before the Ivatt arrived the KDRA test ran all 5 DMU cars as one unit to check for any possible problems with this, the longest train the KDRA has ever run. The following photo shows the 5 DMU cars at Keith Town.

The following 2 photos show 46512 with plenty of steam preparing to depart on a test run. The first test run was undertaken by the Ivatt with no coaches to ensure there were no problems particular to the Ivatt in traversing our line.

The next photos show 46512 backing down onto its 5 car train and departing Dufftown with a test run of the 5 cars.

Next 3 photos show the engine running tender first up the Towiemore straight. Final photo is taken from the cab of the Dufftown car coupled to the Ivatt, note the 150th headboard and the 61 D Dufftown shed plate on the smokebox door.

1st photo following shows the train tackling the sharp, check railed curve and bank to Dufftown station. Next 2 photos show the locomotive at Dufftown platform with the debriefing begun. Last photo in this section depicts the Ivatt being run into the loop to be shut down before the start of passenger services the following day.

The 2nd following photo shows the first steam hauled passenger service in 50 years leaving Dufftown on 12/10/2012 at 11:00. Taken from the footplate looking back over the tender as Strathspey Railway’s 46512 leaves Dufftown station with all 5 of the KDRA’s DMU cars.

First photo following shows a sign that was in frequent use over the rest of the weekend. The sign had to be quickly made up as it had not been needed before. The next 3 photos show departures from Dufftown on 13/10/2012.

Departures from Dufftown 14/10/2012. First photo following was taken from the overflow car park, kindly arranged by Glenfiddich distillery, when our own car park could no longer cope. Next photo shows a crowded platform at Dufftown.

The Strathspey Railway’s Ivatt 46512 leaves Dufftown with its 5 coach train.

JOURNEY FROM DUFFTOWN TO KEITH

The first photo following shows all 5 of the KDRA’s DMU cars crossing the Fiddich viaduct. The parapet of the viaduct is visible on the right of the coaches. Second photo shows the train nearing the top of Parkmore Bank

The two following photos show the train nearing the summit of the line.

First photo, taken from the footplate looking back over the tender as SR 46512 leaves Loch Park behind.

First photo shows the locomotive simmering alongside the platform at Drummuir. Next photo looks back over the train as it approaches Towiemore.

These photos show the train as it crosses Towiemore bridge and occupation crossing.

First photo shows the last coach of the train as it leaves Towiemore behind, taken from the site of Towiemore Halt. A coach full of happy passengers.

These photos show the train approaching Strathmill from the south.

The train crosses the point leading to Strathmill siding and reaches the old loading bank.

The train passes the old loading bank and begins the descent to Keith Town.

The following photos show the Ivatt and train arriving at Keith Town.

Once the train had arrived at Keith Town the engine had to be moved to the other end of the train. As there is no run round loop at Keith Town this was quite a complex operation which is described by the following photos.

Once all passengers had alighted from the train our UDV shunter was called forward from its stabling point at Strathisla Distillery. The UDV was then coupled up to the Ivatt.

The UDV and Ivatt then propelled the train back up the bank from Keith Town to Strathmill.

Once alongside the old loading bank at Strathmill the UDV was uncoupled from the Ivatt.

The UDV then remained stationery alongside the old loading bank at Strathmill. While the Ivatt propelled the train back over the points for the Strathmill siding.

The brakes were then applied on the train and the Ivatt was uncoupled from the train. The Ivatt then ran forward over the points and into the Strathmill siding.

The Ivatt now seems to have grown a chimney like the original “Rocket”. The UDV waits patiently alongside the old loading bank.

The UDV was then run forward to the train and coupled up. Then UDV drew the train over the Strathmill siding points towards Keith Town.

The UDV continued to draw the train towards Keith Town until the last coach was alongside the old loading bank where it halted.

The Ivatt then reversed out of Strathmill siding and ran forward over the points.

The Ivatt continued forward until it buffered up to the last coach of the train. The Ivatt and UDV with the train of 5 coaches between them ran back down to Keith Town. The train was halted in the platform at Keith Town, the UDV was uncoupled and returned to its stabling point alongside Strathisla Distillery. The train and Ivatt remained at the platform ready for the return journey to Dufftown with the Ivatt now running tender first.

The next 6 photos show the 150th Anniversary train departing from Keith Town.

PASSING STRATHMILL ON THE RETURN TO DUFFTOWN

JOURNEY FROM KEITH TO DUFFTOWN

The Ivatt steaming, tender first, south to Dufftown approaching Douglas Brae. These shots show the trail of smoke and steam wafting over the DMU cars.

First, the train steams away from Towiemore. Next, halted at Drummuir Station, this view shows the site of the second platform and line at Drummuir.

The train leaves Drummuir behind and heads for the garden bridge, in the first photo. The train approaches the road overbridge to the Loch Park Adventure Centre.

The train crossing the Fiddich Viaduct.

View from the footplate over the tender as the train approaches Dufftown platform on the last train of the day, Friday 12th October 2012. Final photo, the Ivatt propels the train into the loop at Dufftown.

DEPARTURE OF 46512 FROM DUFFTOWN

The following photos show Ivatt 46512 being loaded onto the lowloader, secured and prepared for its departure from Dufftown. The final photo shows the Ivatt on the road outside Dufftown station about to leave on its return journey to Aviemore.

At the end of the last service on Monday 15th October 2013 a small celebration was held to celebrate a successful weekend as shown in the following photographs.

First and most importantly a special ‘Thank You’ to all our passengers who travelled from near and far to make this a truly special and memorable 150th Anniversary Steam Special weekend.

Finally thank you to all the photographers who provided us with so many excellent photos of the event.

This event was Supported by Moray LEADER AND Awards for All Scotland.